Does what it says on the tin; adds various additional weapon modifications to existing weapons.

To start off with it adds a .50cal Receiver option to the Combat Rifle and a 60 round Drum Magazine. More modifications and caliber options for various weapons are to come.

Attributes are a bit wonky, Drum Magazine will be getting higher crafting costs and the .50cal receiver will get a slight damage nerf to bring it more in line with the 50cal receiver on the Hunting Rifle in the next update. The .50cal receiver on the Combat Rifle is slow firing by design; there’s no free lunch. Ideally I’d like to impose greater limitations on ammo capacity as well; think the 9 rounds of .458 SOCOM in a 30round AR mag for instance if you want a real world example.

Before anyone comments; the photo lies, I haven’t yet added a longer barrel for the Submachine gun. It’s been mocked up in console and played with but hasn’t yet been put into the .ESP yet.

Made in FO4Edit if that matters to you. If you want to know what I’ve figured out with the FO4 weapon mod system pry it open and have a look for yourself. If you can figure out how to get the sound override property for the .50 cal working on the Combat Rifle let me know in the comments. 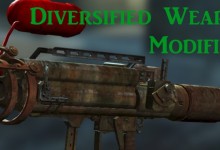 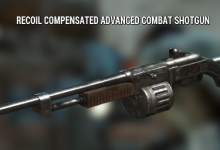 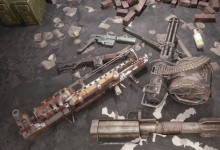