Have you ever noticed how the Combat Rifle and Combat Shotgun seems to look exactly like one another? Well, that’s because they were supposed to be combined together — looking at the model files with almost the same directories. As well as obviously they look alike. Then it hit me, so i did this.
It adds additional modification from the Combat Shotgun and Combat Rifle onto one another. The other mods are renamed such as “Short” with “Stub” barrel.

I also modified the magazines of both. Giving both the Small,Medium,Large and Drum magazine. In which previously the Shotgun did not have the Large, while the Rifle did not have the small. But there was this mod already called “Drum Magazine” for combat rifles. So i did not bothered to make a separate Drum Magazine for the combat rifle, but i could not find it on Nexus Mods, so ill upload it here, additional credits for Extort713. If you plan to be very very sneaky, the Small Magazine for the combat rifle is added, makes it lighter and adds better handling traits.

– Combat Shotgun and Combat Rifle has “compatible” mods.
– Remixed the barrels of both weapons into Stub,Carbine, and Long. Combat Shotgun’s spread is ultra tight with the Long barrel.
– Remixed the Magazines of both into Small,Medium,Large and Drum. There is already an existing Drum Magazine mod for the Combat Rifle, but i could not find it in the Nexus Mods, i don’t know what happened so it’s included here.

Shortcomings:
– Due to Models borrowing one another, the Carbine Barrels for the Combat Rifle has a bit of a gap. And the Large Magazines for the Shotgun can be seen to be loaded with rifle rounds, and just as well the Small Magazines are loaded with shotgun shells.
– I don’t know how to fix this, but i could not modify how the crafting list would turn out. 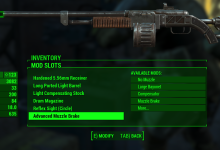 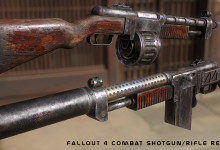 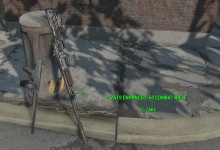