Did you ever wonder why one of the best looking gun models in the game was used only for one unique weapon? Are you sick of .38 ammunition clogging up your inventory as soon as you get that 10mm you never have ammunition for? Well introducing the 9mm Pistol, your luxurious middleground weapon that you missed from New Vegas.

No more hunting for 10mm ammo and being practically unarmed without it. No more waiting for 10 levels before ranged stealth kills are practical (Comes with suppressor when spawned, haven’t found a way to alter that yet, but suppressor has no perk requirements anyway). Balanced for vanilla gameplay between pipe and 10mm pistols, dealing 15 damage as a base weapon, with all the mods available to the deliverer. Pipe Pistol Leveled List has been adjusted to hopefully start spawning the weapon around level 8, between pipe auto-pistols and pipe rifles (Note I believe that’s enemy level if spawned as a weapon in use).

The weapon -should- have a chance to receive legendary effects, but this requires feedback and player testing since it’s all about random chance.

Note: The magazine size is set to 12 but it has a magazine of 18 for some reason instead, not that I overly mind, since it makes some sense to have more ammunition in a smaller, faster firing handgun.

Also Note: I am using a texture mod that might make the pistol look different in your game than the picture above.

– To Use
If you want to give the weapon a try, just enter into the console: ‘player.additem xx000800 1’ without quotes and replacing ‘xx’ with where the mod is in your load order, or enter ‘help 9mm 0’ and look at the single entry for WEAP, which will have the number you need to enter.

– To Uninstall
Simply remove with NMM or delete the esp from your Data folder. 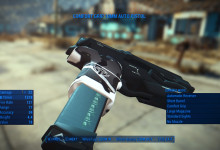 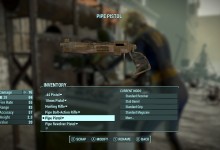 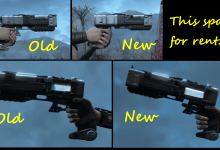