These are personal presets that I have been working on since the day the game came out. I have been tweaking them nightly to get just the look I want for my gaming in Fallout 4. A few friends asked me to share the preset so here it is. Those of you who know my Grim and Somber Presets (for Skyrim) should not expect the same with these presets. I wanted a very different look to take advantage of new visuals in Fallout 4.

I went for a very clean and clear look with increased contrast and dark shadows. I do love my bloom, however, so there is some subtle bloom with a slight blue tint to it. I found nights to be too bright in Fallout 4 so the preset also aims to make nights (and interiors) a bit darker. This preset works very well with the Darker Night mod. There is also a suggestion of some vintage look and feel but it is very subtle. Colors are a bit more vibrant than my usual work.

For general gaming I recommend the Brotherhood of Steel preset. It has all the main effects enabled but none of the big FPS killers nor any of the screen archer effects like DOF or GRAIN. I spent the most time on this preset tweaking bloom, DOF, and HBAO settings. What I came up with is what I like and I will not be changing them.

Screenshots for these presets were all taken at 2560 x 1440 resolution with all game settings on ultra and pretty much baseline INI settings minus a couple of tweaks to load textures in the distance better. I do not use SMAA or FXAA in any of the presets as I find it causes excessive shimmering. TAA works great with this game and I counter the extra blur caused by TAA with high Luma-Sharpen values.

I am also hosting a preset file for my friend JoPineapple. It is the Vintage Railroad Preset He made a great vintage preset but lacks the time to manage it on Nexus so I offered to host it for him. All credit for its visuals go to him. Jo also uses the Darker nights mod (Lowest darkness version with blue tint and vanilla skies), and the light mod and remove interior fog mod.

Brotherhood of Steel (BOS): This is the core preset for hardcore game play. Its streamlined and has all the core effects enabled. DOF, HBAO (Ambient Occlusion), and GRAIN effects are disabled by default.

Institute (INST): This the high tech preset with all main effects enabled including DOF, GRAIN, and HBAO. Note the HBAO is a major FPS killer. On my PC it could take as much as 20 FPS in certain areas.

Minutemen (MM): This is the vintage version. Many effects are active although to save FPS I have HBAO disabled by default. Besides the core effects it includes DOF, GRAIN, TECHNICOLOR, TUNINGPALETTE

Special Guest Preset – The Railroad (RR): This vintage preset was made by JoPineapple and it is another vintage preset that I think looks amazing so I offered to host it for him. Install and use just like any of the other presets. All credit for visuals go to Jo. By default HBAO and DOF is enabled on his preset. See the readme in the preset download for how to edit this.

2 – I suggest a manual install. Extract the files from the download and then copy the entire ReShade folder into your root Fallout 4 folder (the steam directory one), along with the ReShade.fx file and the ReShade64.dll file.

5. Run the game. You should see messages on the screen indicating the ReShade (and SweetFX) is running.

When using a preset that uses HBAO you may notice yellow error messages that show up in the upper left hand corner of the screen. They can be ignored – they are just warnings and are nothing to do with this preset – they are part of the ReShade base code.

I spent a lot of time on the HBAO trying to get something that works along with the game SAO setting (as I did not want to have to choose just one or the other). Overall I think it looks good given the limitations of the ReShade implementation. You will notice shimmering on grass and some odd effects on fog, mist, or looking at objects that are underwater. Nothing can be done about that. I assigned a hot key for HBAO use myself so I can disable it during game play where there is a lot of fog in the distance. Plus it hurts FPS a lot so I mainly only use it for screen shots.

I did my best to make a playable DOF but ReShade lacks the customization of DOF in Skyrim ENB. There is no way I could make it acceptable for everyone so I tweaked it to a playable version for myself. Menu items can blur as can parts of the UI. But overall the blur is weak and in the distance for actual game play. I also assigned a hot key to it so I can enable/disable as needed. For screenshots I often adjust on the fly but in general I am happy with the DOF settings I made.

I did not focus on FPS rates that much as it isn’t a concern of mine. If I get at least 25fps or higher I am happy. I won’t be fine tuning any of the presets beyond what they are now. Best performance is Brotherhood of Steel. Worst is the Institute. The biggest cost of FPS is the HBAO effect. After that probably DOF and then Bloom. Each user can find their own balance.

None beyond the ReShade framework itself. I do recommend the Darker Nights mod as I tweaked the preset around that mod to enhance it somewhat. I used Number 2 Medium (Dark in the most current version).

I recommend always completely removing the ReShade folder to uninstall to avoid any mix-up of CFG files with other presets. Replace it with the general one you get from the ReShade website if you want a clean version.

I have assigned hot keys to many effects as well as changing the default toggle for all effects. Please see the key list below for the hot keys. Hitting the assigned key will enable/disable the effect. A message will display in the upper left hand corner of the screen indicating if the effect was enabled or disabled. You can ignore the yellow warning messages – they relate to HBAO and nothing I can do about them.

If you wish to change the assigned keys it is pretty easy. If you look in the main ReShade folder (the one you downloaded from the ReShade website) you will see a folder called “PersonalFiles” and inside that is a file called KeyCodes.h. Open that up and it shows a key board mapping with numbers for each key. I use those numbers to assign the hotkeys. For example the key F12 is the number 123.

Now that you know what number to use for any key on the keyboard you can edit the CFG file that has the effect you want to assign a new hot key to. For example if you want to change the hot key for DOF open the McFx.cfg file. Scroll down to the DEPTHOFIELD section. Under “Global Parameters” you will see:

Change the number 107 to the number of the key you want to use to toggle the effect.

You can only use a hot key to toggle effects on and off IF the effect was enabled in the shader file in the first place. So the Institute can toggle DOF, Grain, and HBAO with a hot key as they are all enabled at the start. But if you want to use any of those with the Brotherhood preset (which has them disabled by default) you need to first enable them in the code file. Then you can use a hot key to turn them off and on. To enable these effects (or edit them in any way) you need to edit the McFx.cfg file for that preset (and make sure the one you edit ends up installed in the ReShade folder or you won’t see the edits). So open the McFx.cfg file with any text editor and look for the proper section to change:

For HBAO look near the top for this line:

For DOF look below the HBAO section for this line:

There are many other settings you can tweak but you will have to experiment yourself with them. I can say I pre-set a nice strong DOF for use with Matso if you want to try it. Look for this line:

Change the DOF_METHOD number from a 2 to a 5. This will enable a strong bokeh effect. To make it even more powerful edit this line:

Then to make the blur stronger and more pronounced edit this line:

Try values around 10-15 for something really strong. Lastly this line controls the camera focus point, which by default is the center of the screen:

So (0.4, 0.5) would center a bit to the left and on the character. I usually use the console TFC 1 command so I can freeze the scene and move the camera around (along with the FOV command to change field of view). Sometimes you want the center to be off center, however, and then I edit the camera focus points for that.

To all the folks over at ReShade who make these files available. It is maintained by crosire (ReShade developer), Ganossa (GemFX and configuration tool developer), CeeJay.dk (SweetFX developer), Marty McFly (MasterEffect developer), JPulowski, Ioxa and more

JoPineaplle for sharing his Vintage preset.

The Nexus mod and preset community for help and advice.

Bethesda for making the game. 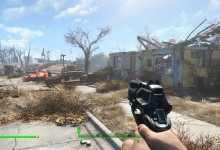 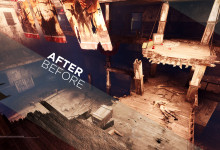 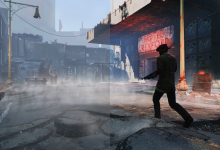