When I first got Fallout 4, I was less than impressed at its workshop system, mostly because I know that it can be so much more; in The Elder Scrolls V: Skyrim, modders have created a much more powerful and user-friendly system that, essentially, does what Fallout 4’s workshop mode does, only better.

All of those mods, though, are way over my head – not only do I not know the scripting language, Fallout 4’s version of the Creation Kit isn’t even out yet! So those other game-changing mods will just have to be made later, by magical people who make things that are amazing. And magical.

For now, though, I humbly present my very first mod – a band-aid of sorts for Bethesda’s mind-boggling oversight of only allowing us to be able to scrap certain things.

Despite the title, you can’t actually scrap everything (yet, anyway – I hope to one day reach that lofty goal). You can, however, scrap a whole bunch of stuff that you couldn’t before! I pretty much concentrated on Sanctuary as of now in terms of stuff unique to a particular settlement (I haven’t tried visiting other settlements and seeing if it works there, but I would assume so). I hope to one day have everything be scrapable in every single settlement.

This mod has been made completely with FO4Edit, and shouldn’t (I hope) cause anyone’s game and/or computer to explode horribly. But if it does, it’s not my fault! So… yeah. I did test it, though, and it works fine so far.

This mod allows scrapping of the following:
V 1.0 –
• Sanctuary house walls, foundations, carports (where the cars are parked) and roofs
• Grasses, shrubs, trees, hedges, vines, brambles, leaf piles, and other plants
• Sanctuary Roads and sidewalks
• Halloween decorations (pumpkins, skulls, cats, skeletons, and more)
• Ceiling, floor, and wall lamps and lights
• Candles (and melted candle puddles)
• Playground Equipment (monkey bars and jungle gym)
• Floor grates
• Office papers
• Trash and debris
• Dogmeat’s Doghouse (can’t be scrapped when he is in it, so make him move before you scrap it)
• Kitchen counter (there was a type that wasn’t scrapable)
• HVAC units (found in the laundry rooms of the Sanctuary houses)
• Towel hooks (in the bathroom)
• Bathroom grab bars
• Makeup? Drawer (in the bathroom)
• Fire extinguisher holder
• Showers and shower curtains
• Soap trays and toilet paper holders
• Wallpaper scraps (the flowers sometimes found on the walls in certain houses)
• Ceiling fans
• Foot Paths (in the backyard of some houses in Sanctuary)
• (static) oil lanterns
• Planters
• Garden hoses
• Thermostat
• Plywood door 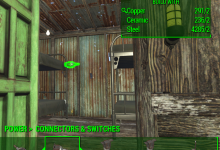 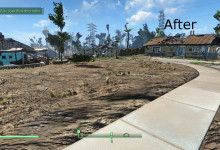 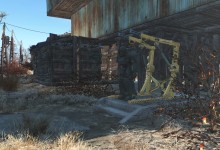