This started out as a personal mod to change the recipes of soups to use purified water and add a recipe for the dirty variant but got me thinking about the use for dirty water, it had very little use now. This was a pattern I noticed with many consumables namely plants found in the wasteland and thus I created this mod giving many of them new purpose! Additionally I made some chems and aid items require higher level perks to craft (However this is optional) in order to urge you further to pick those plants, cook your food and live off the land!

Logical Recipes goes well with my other mod Wild Fruit Conversion so check it out!

Recipe changes and reasoning behind them:
I tried my best to make as much sense as possible with these recipes but if you have any suggestions on changes or find any bugs please let me know in the comments!

Soups & Omelettes
All soups & omelettes have had their dirty water changed to purified water as it is much easier to get then dirty water and makes little sense why you would cook with it if you have clean water at hand.
– Dirty Water -> Purified Water

Purified Water
Simply boiling dirty irradiated water won’t change it into “purified” water, the radiation needs to be removed and debris need to be filtered out hence the antiseptic and cloth.
– Dirty Water x 3 -> 2
– Antiseptic
– Cloth

Dirty Water
I’m sure its still needed for some things and it should be craftable so just throw some slightly irradiated fertilizer in there and there you go.
– Purified Water
– Fertilizer

Antiseptic
Seeing as the alcohol crafting requires this and medicine is put behind a perk wall I decided to give Bloodleaf and Thistle more purpose, googling around I found that in fallout lore bodies of water with bloodleaf tend to be safe to drink, while thistle used to be used as a home remedy for a time for some ailments.
– Thistle
– Bloodleaf

Fertilizer
Unless you have brahmin, fertilizer is hard to come by which is a problem if you plan on growing a lot of crops or being a heavy jet junkie. The dirty water in this recipe may seem scary as it requires fertilizer to make but don’t you worry this recipe makes 3.
– Dirty Water
– Brain Fungus
– Tato x 2
– Tarberry x 2

Refreshing Beverage
Overpowered homemade remedy healing more radiation then rad-away and getting rid of addictions. Changed the recipe to require rarer materials while requiring no perks to craft. Removed most medical ingredients, added Nuka Cola Cherry to make recipe more rare and as a way to mask the flavor along with mutfruit, changed it to glowing bloodpack as it makes more sense for clearing radiation then stacking up Rad-Aways and is more rare and finally using aforementioned bloodleaf instead of antiseptic to keep with the home remedy theme.
– Stimpack
– Bloodpack -> Glowing Bloodpack
– Antiseptic -> Bloodleaf
– RadAway x 2 -> 1
– Purified Water x 2 -> 1
– Nuka Cola Cherry
– Mutfruit x 2

Chems & Aid (There is a version without these changes)
Changed chems to require Chemist Perk more throughout the board as you would need some level of expertise to get the dosage right when merging chems as to not overdose and kill yourself, Jet, Jet Fuel, and Ultrajet however remain unchanged as a crude and simple drug. Same has been done with some aid items requiring higher levels of the Medic perk, these adjustments make cooking food for healing more appealing as it doesn’t need perks while the more powerful healing items require an investment.

Alcohol Crafting
Added alcohol brewing found under its own category in the chemistry station using antiseptic to sterilize, cloth to use as a filter and brain fungus to take on the role of yeast. I debated on requiring corks and glass but then I’d have an overwhelming desire to change all recipes to require components for their containers so I left it alone (For Now).

Wine
Wine can be created out of fruit juices, theres no grapes or blackberries (Blackberry wine is delicious) in the game so I opted to use tarberries as they aren’t used all that much in recipes and this gives you a bigger reason to want to farm them.
– Antiseptic
– Cloth
– Purified Water x 2
– Tarberry x 2
– Brain Fungus

Whiskey
Whiskey is made out of corn so corn it shall be.
– Antiseptic
– Cloth
– Purified Water x 2
– Corn x 2
– Brain Fungus

Rum
This one was fun to think of, Rum is made out of sugar and molasses and since the wasteland is devoid of sugar (and all seasonings for that matter except the shakers you see in your home) I thought up that you could extract the sugar from the sugarbombs (Filtering it with water and then evaporating till you have a thick sugary solution) and use mutfruit for the molasses (Again mash it, filter it through some cloth with water and evaporate).
– Antiseptic
– Cloth
– Purified Water x 2
– Mutfruitx 2
– Sugar Bombs
– Brain Fungus

Bourbon
For this one you use corn and some rye and barley malt which is replaced with razorgrain in this instance.
– Antiseptic
– Cloth
– Purified Water x 2
– Corn
– Razorgrain
– Brain Fungus

Vodka
Vodka seems to be able to be made of multiple things including grains, corn, fruit juices, or potatoes so I opted for the latter as we are using all the other ingredients for other alcohols, I guess wasteland vodka has a tinge of zestyness from the potato-tomato hybrid.
– Antiseptic
– Cloth
– Purified Water x 2
– Tato x 2
– Brain Fungus

Compatibility
This mod has compatibility in mind and plays well with mods that alter food and chem properties as it just adds/changes recipes. However other mods that alter the same recipes that I do would get overridden based on load order so if you want my changes put my mod lower in the load order.

To Uninstall
Uninstall with mod manager. 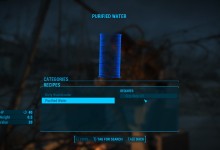 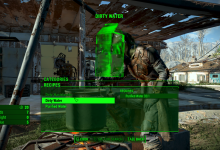 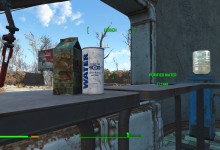