Posting here since people skip all my posts heh – There is an issue with the weather effect spell that can kill you when you fast travel after taking radiation. It is a minor bug to fix, but you’re best just leaving the effect off for now. Enjoy the harsh visuals of the rad rain storms without the damage effects, and wait for the update to re-add the radiation damage effect. Should have a fix within 24 hours (or less.)

(Made with FO4Edit, NifSkope, Gibbed’s FO4 Tools, Photoshop, Cubase/Wavelab, Wacom, and a whole lot of time and love.)
Please see the FAQ in Sticky Post in the Posts tab for any questions, and updates about any known quirks.

Intense visuals during rainstorms — distant fork and sheet lightning in the sky!
All-new heavy rain/dust textures, materials, visual effects, and particle geometry for truly heavy storms!
No more “white rain” – particle materials are now using proper alpha blending and lighting, and are effected by the ambient lighting conditions.
20 all-new, intense thunder sounds, and a new method for much more unpredictable/random playback.
New interior sounds for all weathers: wind, rain, radstorm, and thunder sounds for all rain types, but only inside locations where it makes sense.
New weather types, with new particles/materials, including radiation rain, heavy dust storms, heavy fogs, heavy/light rain, and more!
Weather chances have been slightly altered to give a little bit more diversity (the vanilla game heavily favors sunny weather.)
Weather will stick around just a little bit longer — you will no longer experience 4 or 5 different weathers in a single day.
Vanilla night brightness and several darkness levels available, for compatibility with darker nights mods.
Volume slider for new thunder and rain sounds to give you more control for your audio setup.
THIS MOD WAS MADE WITH FO4EDIT, AND ONLY EDITS SIMPLE RECORD TYPES (see sticky post for more information)

I HIGHLY recommend using this along with a darker nights mod such as Darker Nights to get the full effect!

I also highly recommend setting your timescale to something lower, so time passes better. I use 10. (in the console type ‘set timescale to 10’ but weird things would happen in Skyrim going lower than 7, so be careful.)

New weather types, and variants to the regular weather have been crafted, including:

Heavy Fog and Light Fog – The Commonwealth at midnight when fog is rolling through is absolutely chilling. (Fog effects by Prod80!)
Heavy and Light Rain – Rain storms are now heavy and loud, but there’s still a chance for soft rain, also with it’s own textures and sounds.
Radiation Rain – Rads fall from the sky in two variants, heavy with 8 rads/sec (better pop a Rad-X!) and light rain, at 1 rad/sec.
Heavy Dust Storm – Very low chance to occur, but you won’t want to get stuck outside when this hits.

First and foremost, if you are new to modding please watch this fantastic beginner video by Gopher – Enabling Modding for PC to get set up.

Read carefully, it’s quite simple! If you have any questions or issues, read the FAQ below or in the Sticky Post in the Posts tab.

FIRST MAKE SURE YOU HAVE THE /MATERIALS/ PATH AS PART OF YOUR PATH SETTINGS OR STRANGE THINGS WILL HAPPEN!

1. DOWNLOAD THE MAIN FILE – Required. Contains all the base components and files. Install using your favorite mod manager. Unless you need the optional files below, you’re ready to go, but please read the final highlighted step 5 in red about enabling weather effects!

2. OPTIONAL FILE: DARKER NIGHTS – If you’re using a darker nights mod, grab one of the optional darker nights files, so True Storms’ nights will better match. There are three levels of darkness, one of which should suit your night time level. Make sure this loads AFTER your darker nights mods. See sticky post for more info if you’re confused.

3. OPTIONAL FILE: NO ROLLING FOGS – The fog effects during fog/misty rain weathers may be performance heavy on lower-end systems. Grab this file to use the vanilla fog instead if it hurts your performance. I suggest only grabbing this if performance is really bad, because you lose a lot of the atmosphere!

4. OPTIONAL FILE: PROPER SUNDOWN TIMES – In the vanilla game, it’s light out until around 9:30pm and doesn’t get fully dark until almost midnight, giving you only about 4 hours of real darkness. This plug-in makes it so the sun starts going down at 4:00pm, and it’s dark by around 7:00pm. LONG LIVE THE NIGHT.

5. EXTREMELY IMPORTANT FINAL STEP! Until the Geck/CK is out, there is a tiny one-time step required to receive the special weather effects, such as radiation damage from rad rains, and other buffs/debuffs I’ll be adding in the future. “Spells” are how everything is attached to the player, and there is one spell you will need to attach using the console. This is in no way weird or dangerous, and again, is 100% how this is always done, but is normally done behind the scenes with quests/scripts, which aren’t possible to safely edit right now without the CK. Once you save this will never need to be done again, and can be removed at any time should you ever want to remove this.

After installing, when you load into the game, open the console with the ~ key, and type the following exactly, including quotes and numbers:

You will see a [SPEL] with an ID next to it, XX000849, where XX will be the number of where the plug-in lies in your load order. Using the full ID (again no XXs, you will see a real number) type the following:

Again, where XX is the number you see that corresponds to where the plug-in is in your load order. Tada! You’re done. If you ever want to uninstall True Storms, or would like to NOT receive damage from rad rain, type player.removespell XX000849 and you’re good.

UPDATE: There are some glitches with the radiation damage spell that can kill you when you sleep or fast travel that are being looked at. I have to recommend to just not add the spell for now until I fix it, or if you already have, do the above command to remove it until I get it fixed and just enjoy the visuals of the rad rain. I expect to have a fix within 24 hours, as I’m pretty sure I know what’s going on.

COMPATIBILITY
In general, not compatible with mods that do the exact same thing, which is overwrite the vanilla rain textures, or alter the vanilla rain sounds. You can always overwrite True Storms’ main rain texture with one from another mod, but the material behavior may not look/work the same, as they have been finely tuned together with light as well to achieve the effect.

Darker Nights – COMPATIBLE WITH PATCH. Just grab one of the darker options in the optional files, make sure True Storms and the patch are after Darker Nights in your load order, and you’ll be set. unforbidable has graciously offered to make patches for all of his levels, so keep an eye out for those!
Deadly Radstorms – MOSTLY COMPATIBLE. I don’t alter the vanilla radstorms, so any of the options that increase the damage will work without any problems. However, the versions that increase the chances of radstorms are not compatible, because we both edit the same climate record that holds all of the weather information.
More Common Weather – NOT COMPATIBLE. Both that and my mod directly edit the climate record, which controls which weathers show up where. Using More Common Weather you will not get any of my new weather types. I have spread around the weathers so it’s more diverse, so you may not need that one any more if you use this.
FO4 Rain – NOT COMPATIBLE BUT CAN STILL USE. This is a texture mod and directly conflicts with True Storms. You can overwrite True Storms with any rain texture you like, but I can’t guarantee it’ll look good with the additional material settings I’ve added/altered.
Louder Rainy Sound – REDUNDANT? I already make the vanilla rain sounds for soft rains louder with the plugin, so adding those edited sounds in will make light vanilla rain SUPER loud. Probably not needed unless you want the soft rain to be a specific kind of loudness.
Radiant Clouds and Fog – FULLY COMPATIBLE. I don’t alter any cloud textures, or mountainous fog textures, so this is good to go.

Prod80 for his wonderful fog effect meshes!
The TES5Edit / FO4Edit Team, specifically Zilav who is always giving me good tips and advice, even when I ask stupid questions.
The NIFSkope Team – Skyrim/FO4 mods just wouldn’t be possible without their work.
Mangaclub for being awesome and making cool, inspiring stuff.
Isoku, whose wonderful mods for Skyrim are what made me want to start making mods in the first place.
Terrorfox1234 for testing and being generally suave!
Elianora for putting up with me spamming her in chat with screenshots and scattered progress on all my random stuff!
The entire /r/skyrimmods and /r/falloutmods community! 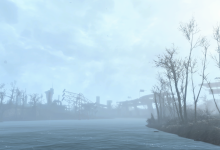 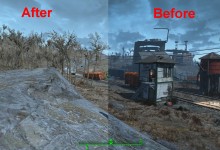 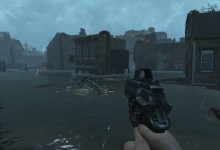