The goal of this mod is to increase the visual quality of the creatures in the game while providing several options that work for everyone’s PC, including an ultra high-res version and a version with performance equivalent to vanilla.

The ambitious goal of this mod is to cover all the creatures. It will probably take a long time to get there, so I’ll be updating this mod every time a new creature is finished.

Current version (0.10) – Includes retextures for the basic Deathclaw only.

Next update – I plan on adding all the deathclaw variations next (glowing, albino, chameleon, etc.)

Which version is right for me?

You’ll notice that there are 3 versions of the mod: Performance, High, and Ultra.

High: Has 1 to 2 times the resolution of vanilla textures. This version will probably be suited for most people. It has a higher performance cost than vanilla but not significantly higher. Good if you can comfortably run the vanilla game with good performance.

Ultra: Has 2 to 4 times the resolution of vanilla textures. This version basically has the highest resolution that I can export. I would only recommend this if you have a godly PC.

This mod can be installed like any other mod. 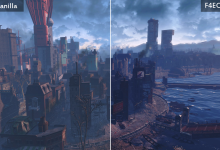 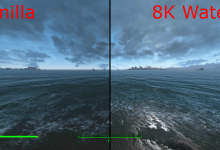