THIS IS IN ALPHA!!

NOT ALL WEAPONS ARE AVAILABLE TO ADD YET! Check the images to see a list of what weapons work so far. I will eventually add all weapons.
I am nowhere near to being done, but it is functional for now an I need input. It will take time and the CK to make this as functional as I want, but I am really excited to share what I have so far

Displays your weapons on a wall mounted pegboard like in the opening menu. Constructible from the workshop under furniture > Miscillaneous.

I created a small, medium, and long version for various sized weapons. Small weapons go on the small board, medium on medium, long on the long board.

– The weapons default to their base world model. I can’t fix this yet (I think) until the CK is out. What this means is that all weapon modifications are invisible while displayed. It will go to the default look as if there were no changes made to it. Don’t worry, all of your mods are still on your weapons, they are just invisible

Look at the last image and you’ll see what I mean. The modifications and legendary stats are all still there.
– moving this while weapons are displayed will make them float in the air until you open the container and exit out. Then they will reload.
– FYI, This uses the same scripts as the bobblehead display stand, so technically, you could put these items on the bobblehead stand, but there would be a LOT of clipping lol. Once the CK is released, I’ll be able to create a unique script.

It is craft-able at your settlement workshop under the same category as the bobblehead stand. Furniture > Miscillaneous

– Not compatible with mods that alter vanilla weapon stats. (As far as I know so far, that’s why I’m posting it in alpha. So you can all let me know how it works) 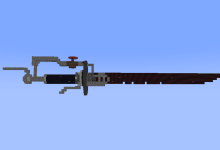 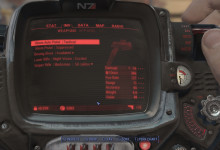