What does it do?
This mod replaces the facial textures for Danse. Included are the diffuse (color), normal map (bump details), and specular (shine) textures. My goal was to clean the dirt from his face and clear up his skin without changing any of his facial features or drastically altering the way he looks. He still retains some of his scars but has a clearer, cleaner, and in my opinion more handsome face. These textures actually took quite a lot longer to cobble together than I had originally intended to spend when I started this pet project. I wasn’t aiming to spend any real time on them, nor did I have plans to release them here, BUT I am quite happy with the end results and thought others might like them too!

How was this done?
I combed through every single NPC face texture I could find and hand-selected approximately 30 textures with the goal of picking and choosing the features I thought worked the best to essentially recreate a cleaner, clearer version of Danse’s face. I combined different parts from several of these textures and carefully compared my progress with his original textures as I put them all together. Please see the comparison images I’ve provided if you’re curious about exactly what changes were made.

How do I use it?
Simply install using a mod manager, or to install manually, drag the contents of the archive into your Data folder, merging if asked to.

How do I remove it?
To remove, use your mod manager again or manually remove them by deleting the following files from your Data folder:

How do I get him out of his %^#)$(@$ power armor?!
I can tell you how I did it, but I’ve read that people have had success in a couple different ways.

– Make a hard backup save before you do this just in case! I cannot stress this enough.

– Open the console and select Danse by clicking on him. Sometimes this won’t work, and you’ll accidentally select a light source or something instead, so the easy way to make sure he’s the one you’re targeting with the console is to simply type “prid 0005DE4D” without the quotes and hit enter. He’ll be selected now.

– Once he’s selected, type “unequipall” without the quotes and hit enter. This will turn him into Slenderman. That’s why we make a backup save, juuust in case we can’t un-Slender him.

– Now comes the part where people have succeeded in un-Slendering him in a couple of different ways. The goal is to make him get out of his power armor frame, which is the only thing not removed by the “unequipall” command, which is what makes him look like Slendy. Personally, I have romanced Danse, and I was able to use this to my advantage, but keep in mind that it is not possible to complete his romance without progressing far enough in the main quest, specifically in BoS quests. You do not have to finish the game with the BoS, but you will at least need to get to a certain point, and you will definitely know when that happens. If romanced, you can try what I did. I took him to the Dugout Inn in Diamond City and rented a room there. For some reason, my beds in Sanctuary didn’t work, but the bed here did. Sleep while he’s with you, and you’ll get the Lover’s Embrace buff. He’ll make an amusing comment, and you should hopefully find him somewhere close by getting out of his power armor frame! If it doesn’t work the first time, try again. This is how I was personally able to get him out, but it won’t work without completing his romance.

– Another method people have had success with is just letting him wander around as Slenderman for a little while, after which he’ll eventually get out of the frame on his own. I don’t personally know if it works, but it’s worth a shot. I’ve also read other people have had success by fast traveling or waiting as well. It may take some experimentation. Hope this helps!

What mods were used in the screenshots?
I’m currently using Oni Hair Re-Texture, new color version, which makes his hair a bit darker, and Danse’s suit is fancy and crisp thanks to 4k Black Suit and Tuxedo. The retexture of the dress seen being worn by my character in one of the screenshots is the black and white striped version of Sequin Dress Recolored.

Special thanks to WolfGrimDark for his absolutely lovely Grim Wolf ReShade Presets. The images uploaded here were taken with the Grim Wolf Institute preset, which was tweaked slightly for performance.

Please enjoy, and feel free to share your screenshots! 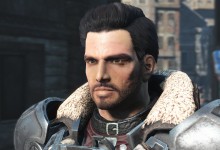 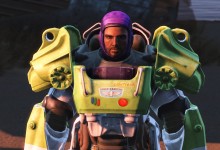 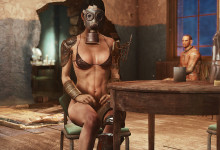