Feel free to add screenshots as you see fit, just nothing *TOO* vulgar 😛

UPDATE: Version 1.1!
Have added MALE versions aswell for each colour. Just update through NMM or if you have any problems just download the new files and install them manually OVER the old files. Screenshots coming!

UPDATE 1.0:
* Have added a WHITE and a RED version, screenshots coming soon. Only install one!

I made this as part 1 of a full set, this is the 111 Vaultsuit retextured in a style similar to Mass Effect 3.
It uses the base textures from the vanilla game but has undergone heavy modification to create my own texture.
This is my first real retexture and am pretty happy with it (hell of a learning curve).

I am hoping to do a whole series of N7 themed textures and am currently in the stages of texturing the Combat Armour. I also have done a pip-boy based on another modders files, I am unable to upload this myself but he has agreed to host it as an optional file on his page so once its up I will put a link here.
I will also be doing the laser rifles in a similar fashion and eventually a full N7 inspired T-60 power armour.

INSTALLATION
Simply use NMM to install, or manually extract the files to your Fallout 4 Data folder. Be sure to have made the necessary changes to your INI files to allow external files to be accessed (Won’t go in to that here, theres plenty of tutorials on how to mod Fallout 4, including one on the main fallout4 nexus page).

FILES
This mod changes the .DDS diffuse maps, normal maps, specular maps, and has also modified the .BGSM material file to remove the golden glow from the Vaultsuit trims and numbers. This WILL have a minor effect on the male Vaultsuit 111 where the number is located (less of a glow) as well as on the trims of ANY female vaultsuit. It wont cause any conflicts, it will just mean the numbers and trims on some vaultsuits will not have a metallic golden glow on the trims or numbers.

COMPATITBILITY
This mod is only a retexture, it will not destabilise your game in any way and will only conflict with mods that also change these textures (Vaultsuit female textures).

UNINSTALL
Simply uninstall with NMM or manually delete the files its added (it does not over write the vanilla textures, just adds to them). 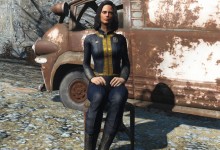 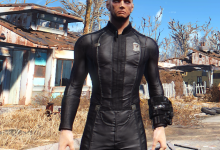 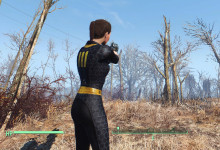